Hjem Artikler VM-blogg: “We are born as losers”
Artikler

VM-blogg: “We are born as losers” 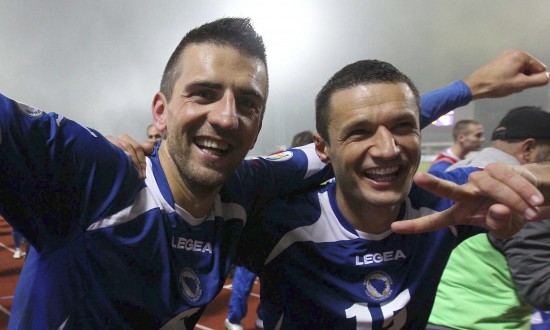 I still remember it vividly. It was a cold October night in Kaunas in Lithuania, exactly eight months ago.

I can still see the sequences in my head. Miralem Pjanić with a brilliant free kick – the keeper saves. Long ball from the back, Edin Džeko tries with his left, the ball goes just wide. A fantastic Spahic’s diagonal pass to Ibišević, he is alone and just needs to nod it in, but Džeko tips it of his head by accident. A total panic when some guy – sorry for being ignorant and not remembering his name – fires it up from 25 meters, but Begović saves. Opening of the second half, Mire Pjanić with another bomb from the free-kick, Giedrius Arlauskis saves again. What is with this guy tonight?! Ermin Bičakčić tries with an overhead kick, it goes just over the bar.

And than it arrived. Zvjezdan Misimović chipped the ball over the home defense, Senad Lulić escaped his guard and hit the net. The stadium – packed with thousands of Bosnians – went wild. As always, I looked to assistant referee first. He was standing there, with his flag pointing to the box. Lulić was offside. Just by inches, but offside. I remember turning to my friend and colleague Nick Ames and telling him a simple thing.

“We are not going to make it. We are born as losers”.

In that moment all the frustrations of my football life went through my head. I remembered being sad on that terribly wet and cold day in Sarajevo, when Greece defeated Bosnia-Herzegovina in our very first competitive match back in 1996, after we completely outplayed them. I remembered defeats to Denmark in Copenhagen and Croatia in Zagreb in 1997, totally undeserved. I remembered terrible nights watching Bosnia slipping against Faroe Islands, Estonia, Israel, Lithuania,…

Then suddenly, my football life – and football life of every Bosnia-Herzegovina supporter – changed forever. Pjanić stole a ball in the neutral third, exchanged couple of short passes in the middle before Misimović found Džeko on the left. He dribbled past one player, landed a pass to the box, a player in a yellow shirt missed the tackle, Ibišević was in five yard box completely alone.

Exactly eight months later – tonight in Rio –  Bosnia-Herzegovina national football team will line up to listen the national anthem for the first time at a major football tournament. Of course I already feel nervousness and of course that I feel the butterflies in my stomach, counting not hours and minutes, but seconds to the match with Argentina. I have my hopes and my expectations, and I know that we have our flaws and advantages.

But, for the first time in my football life, I don’t feel fear of failure. Because, that Ibišević’s simple tap in to the net erased the aureole that floated above our heads for years. Thanks to that goal, to that moment in Kaunas, we finally crossed that couple of inches, and what ever happens from now, at least one thing is for sure. We are not losers anymore.