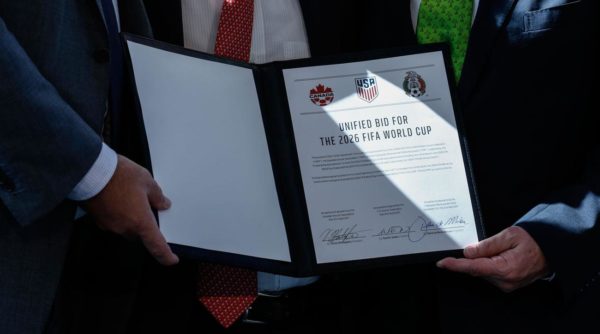 According to FIFA’s guidelines for the World Cup bidding process, bidding nations must provide safety and security information, such as crime statistics, in Section 14 of their bid books. Such information is absent from the bid book of the United bid of the US, Mexico and Canada.

On 14 February, Valentine’s Day, this year yet another mass shooting took place in the United States. At Marjory Stoneman Douglas High School in Parkland, Florida, a former student of the school armed with a semi-automatic rifle killed 17 people and injured a further 17. According to masschootingstracker.org, Parkland was the 41st mass shooting in the US – in 2018. A “mass shooting” is defined by the US nonprofit research group Gun Violence Archive as incidents of gun violence where four or more people are shot or killed.

Four months previously, on 1 October, a gunman had killed 59 and wounded over 400 at a concert in Las Vegas. A month after Las Vegas, a man killed 27 church-goers and injured another 20 in Sutherland Springs, Texas. From 1 January to 30 April, masschootingstracker.org has registered 104 mass shootings on US soil resulting in 166 deaths and 357 people injured in 2018. For 2017 the total number was 427 mass shootings, 590 killed and 1852 injured.

In the aftermath of the Las Vegas shooting in October, the potential influence gun violence can have on tourism was debated in the American press. The number of foreign visitors to the US went down by four per cent in 2017, the country fell one place – from second to third – on the list of most visited countries. According to CNN, several governments list gun violence as a risk factor for people travelling to the United States.
“Will international tourists keep coming?, a CNN Money article asked.
“I think it’s more international [tourists who] might cancel because they’re afraid of the gun violence in the United States,” a travel agent told CNN.

Safety and Security
The US, along with neighbours Canada and Mexico, are bidding to host the 2026 World Cup. Their only competitor is Morocco. If the “United 2026” bid wins the hosting rights, 60 World Cup matches will be held in the US. Millions of people from the US and elsewhere will watch the matches either at the stadiums or via public-viewing at designated “fan fests”.

According to gunpolicy.org, the latest available data show 13 gun-related deaths per year in Morocco, compared to 38,658 in the US, 13,505 in Mexico and 698 in Canada.

The safety and security of the participating teams and other World Cup visitors is of the highest importance for FIFA. In its “guide to the bidding process for the 2026 FIFA World Cup”, the world governing body instructs how a bidding nation’s bid book should look like, what information it can and must contain.
The Morocco 2026 bid book is 381 pages. The United 2026 bid book is 474 pages. These are detailed documents.
A bid book must include a section called “Safety and Security”.

The “guide to the bidding process for the 2026 FIFA World Cup” states the following:
“In this section 14 [about Safety and Security] of the Bid Book, the Member Association shall provide:
(i) information on the general safety and security situation (e.g. terrorism, crime statistics especially on violent/street crimes, hooliganism, threats to public order) in the Host Country at the time of the Bidding Process with special emphasis on each of the proposed Host Cities and in relation to regularly hosted professional sporting events […]”

We asked FIFA if the United bid’s omission of violent crime statistics was a breach of bidding regulations.
«As the bidding process for the 2026 FIFA World Cup is ongoing, we are not in a position to comment. Further details will be available once the respective Evaluation Report has been published», a FIFA spokesperson told Josimar.

Human Rights Policy
In an article by the Associated Press (AP) on 16 April, Morocco 2026 came under criticism for omitting the country’s legislation regarding same-sex relations. “Morocco World Cup bid masks homosexuality ban”, the headline read. According to the article, AP had reviewed the Morocco 2026 bid book and found that Morocco 2026 had not declared the country’s criminalisation of homosexuality.
“Under Article 489 of the Moroccan penal code, sexual acts between people of the same sex are punishable by six months to three years in prison,” AP wrote.

In May 2017 FIFA adopted a new and extensive human rights policy in accordance with the United Nations’ guiding principle on business and human rights.

“Article 4 of the FIFA Statutes prohibits discrimination of any kind against a country, private person or group of people on account of race, skin colour, ethnic, national or social origin, gender, disability, language, religion, political opinion or any other opinion, wealth, birth or any other status, sexual orientation or any other reason. Furthermore, FIFA places particular emphasis on identifying and addressing differential impacts based on gender and on promoting gender equality and preventing all forms of harassment, including sexual harassment,” the FIFA Statutes say.

FIFA’s new human rights policy is an element of the bidding process.
“FIFA also requires the implementation of human rights and labour standards by the bidding member associations, the government and other entities involved in the organisation of the tournament, such as those responsible for the construction and renovation of stadiums, training sites, hotels and airports”, the “guide to the bidding process for the 2026 FIFA World Cup” state.

We also sent the following question to FIFA:
Is there a difference in Morocco 2026 not including Morocco’s laws regarding homosexuality in its bid book and United 2026 not providing information of the level of gun crime of the bidding countries in its bid book?

FIFA, as stated above, were not “in a position to comment”.