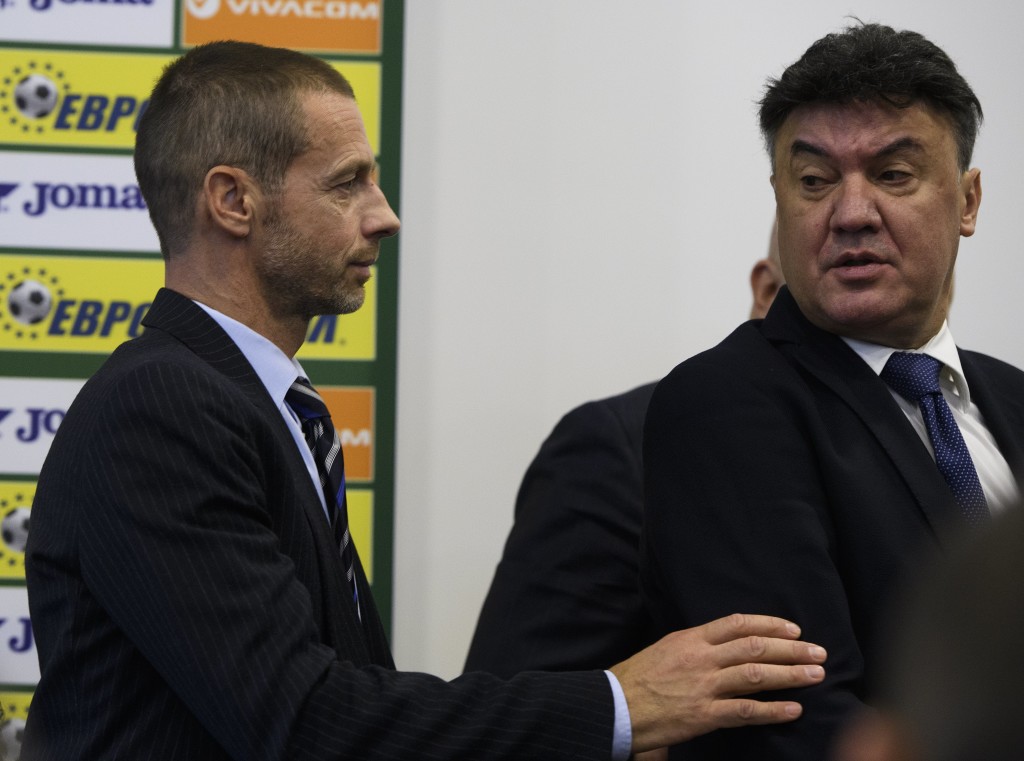 UEFA last year ruled CSKA-Sofia to be ineligible to play in UEFA competitions until 2019/20. Quietly UEFA has changed its own decision and will allow CSKA-Sofia to compete in Europe next season if they qualify. UEFA says their U-turn is based on new evidence, but will not disclose what this so-called evidence is.

On 4 April 2018 the international players’ union FIFPro released a statement on their website.

“FIFPro is calling for CSKA-Sofia to be suspended from European football until it pays overdue wages totaling more than 1 million euros to seven players,” the statement read.

CSKA-Sofia currently sits second in the league table and could through sporting merit qualify for European competition. It was a curious statement to make by FIFPro, after all, UEFA last year ruled CSKA-Sofia to be ineligible for Europa League or Champions League play until the 2019/20 season.

The UEFA ruling has been contested by the Bulgarian club three times through the Court of Arbitration for Sport (CAS) in Lausanne, Switzerland. CAS on all occasions rejected the club’s claims.

Because UEFA, without making any public statement, have overturned its own decision.

Unpaid wages
CSKA Sofia was Bulgaria’s most successful football club. They had since its formation in 1948 as the Central Sports Club of the Army won 31 domestic league titles and 20 national cups. In October 2015 the club was declared insolvent. At the time CSKA Sofia had at least one million euro in outstanding debt relating to players’ wages. Total debt was reported to be around 12 million euro.
Seven players brought their cases to FIFA’s dispute resolution chamber, and later to CAS. Both bodies ruled in favour of the players – the club owed the players money in unpaid wages.

In October 2015, due to outstanding payments and crippling debts, UEFA’s Club Financial Control Body and Adjudicatory Chamber decided to exclude CSKA Sofia from participating in UEFA competitions for the two following seasons. In 29 January 2016 FIFA imposed a transfer ban on the club, lasting one full year.

At the time the club was playing in the amateur leagues. Due to the club’s financial woes, the Bulgarian FA had not granted CSKA Sofia a professional licence. As an amateur side they won the cup in 2015/16.
The club was looking for a way back into the professional ranks, though.

The original CSKA Sofia ceased to exist, and in the eyes of the club’s fans and football stakeholders in Bulgaria it was replaced by CSKA-Sofia.
According to an article in the sports law journal Football Legal “the new club has the same owners as PFC CSKA Sofia; it is using the same colours, emblem, logo and website, assuming the sporting history of PFC CSKA Sofia.”

That summer the Bulgarian FA decided to restructure the league, and CSKA-Sofia was awarded a place in the top division. They were fast-tracked back into the elite.

CSKA-Sofia was given a new registration number in FIFA’s Transfer Matching System (TMS) – the de facto registry of the world’s football clubs. This, along with correspondence between UEFA and the Bulgarian FA in Josimar’s possession, implies that the football authorities view CSKA-Sofia as a new club, starting life in the summer of 2016.

“Sporting successor”
According to the article in Football Legal, CSKA-Sofia was simply created to take on the role of CSKA Sofia.
“[…] PFC Litex Lovech was renamed to PFC CSKA-Sofia and was moved from Lovech to Sofia at the Bulgarian Army Stadium only to replace the original club PFC CSKA Sofia, which is in insolvency and has big debts towards football stakeholders, as well as to circumvent the transfer ban imposed by FIFA and the sanction imposed by UEFA, which are still in force,” the article stated.

While CSKA-Sofia is a new club, “it is de facto the ‘sporting successor’ (using the terminology from the FIFA and CAS jurisprudence in similar matters) of PFC CSKA Sofia and therefore, the ‘new club’ should assume the financial obligations of and suffer the sanctions imposed on the ‘original club’ under the relevant FIFA and CAS decisions.”

CSKA-Sofia has not paid the outstanding wages to the former players of CSKA Sofia. Sources say it claims to be a new club, that CSKA-Sofia is not CSKA Sofia, and it does not bear the debts of the defunct club.

According to Josimar’s sources the club plans a big celebration in May to honour CSKA’s 70th anniversary, and dignitaries such as the prime minister and president of Bulgaria are expected to be in attendance – something that contradicts the notion that CSKA-Sofia sees itself as a different entity from CSKA Sofia.

As put forward in Football Legal, CSKA-Sofia, in football competition terms, is a new club. But regarding financial obligations it is not – it is simply the successor of CSKA Sofia.

“May not apply for a UEFA licence”
In 2016/17 CSKA-Sofia were runners-up in the league, winning a place in the Europa League qualifiers. CSKA-Sofia’s name was not entered into the draw, however. UEFA’s licensing regulations for participation in its competitions state that clubs must have been a registered member of its own national football association for three consecutive years to be eligible for UEFA competitions.

Judging by UEFA’s line of argument, the European governing body viewed CSKA-Sofia to be a member of the Bulgarian FA since 2016, from the date it took over the licence of an existing club, moved it 150 kilometres and changed the name – thus creating a new entity in order to compete professionally.

This ruled the club out of participation in European club football until the 2019/20 season The Bulgarian FA wrote to UEFA requesting an exception to the three-year rule for CSKA-Sofia.

Requesting an “exception” to the three-year rule suggests that CSKA-Sofia and the Bulgarian FA acknowledge that the club’s existence is in fact subject to the rule. UEFA rejected the exception request.

According to the reply, which Josimar is in possession of, signed by UEFA general secretary Theodore Theodoridis and sent to the Bulgarian FA  president Borislav Mihaylov on 29 May 2017, CSKA-Sofia “may not apply for a UEFA licence for UEFA club competitions for the next two seasons (2017/18 and 2018/19).” Three times over the summer of 2017 CSKA-Sofia brought the matter to CAS, using different legal angles. The court rejected the club’s request every time.

In UEFA’s letter to the Bulgarian FA in May 2017, Theodoridis used phrases like “careful consideration has been given to the request” and “taking into consideration all aspects of this case.”

In spite of these words, UEFA has now changed its mind.

“Careful consideration”
On 28 February 2018 an article on the Bulgarian newssite Nova carried the headline  “UEFA has allowed CSKA-Sofia to participate in the Europa League.”

According to Nova, a letter from UEFA confirming this was sent to Bulgarian FA president Borislav Mihaylov.
“After examining the facts and circumstances arising from CAS cases 2017 / A / 5177 and 2017 / A / 5201, the UEFA administration concluded that the three-year rule applying to the club expires in the 2017-2018 season.
UEFA confirms that PFC CSKA-Sofia has the right to participate in the next edition of the European club tournaments, if it qualifies for sports results, meets all other requirements laid down in the respective UEFA regulations and covers the licensing requirements of the Bulgarian Football Union. Please notify the club in good time ,” the letter stated according to Nova.

UEFA have not come out with any statement on their website on the matter. Though uefa.com on 19 February did mention Borislav Mihaylov’s reelection as president of the Bulgarian FA. It is the former national team goalkeeper’s fourth term as the head of the federation. He has also been a member of UEFA’s Executive Committee since 2011.

“This gives me the belief to continue working with my team for the good of the game,” he said after reelection, according to uefa.com.

Whilst previous correspondence clearly state that UEFA is of the opinion – after “careful consideration”, no less –  that CSKA-Sofia’s subjection to the three-year rule ends after the 2018/19 season, in this letter, as relayed by Nova, UEFA concludes the three-year rule that applies to the club expires in 2017/18.

In other words: The rule applies, but cut short by a year.
How can that be?

If CSKA-Sofia is not subject to the three-year rule after this season, does this mean UEFA considers CSKA-Sofia to be the natural successor to CSKA Sofia – a club in existence since 1948, a club that owes a substantial amount of money to former players in unpaid wages?

According to article 66 of UEFA’s club licensing and financial fair play regulations, overdue payables to employees are not allowed if a club is to compete in Europe.

Therefore, in FIFPro’s opinion, until the club has settled with its former players, the club should be banned from European competition.

In May 2017 UEFA decided that CSKA-Sofia was ineligible to play in European competition for the seasons 2017/18 and 2018/19. The Court of Arbitration for Sport upheld UEFA’s decision. According to Bulgarian newssite Nova, a letter was sent in February 2018 from UEFA, signed by Theodore Theorosidis, to the Bulgarian FA president Borislav Mihaylov. The letter confirmed that CSKA-Sofia would be eligible to play in UEFA competitions for the season 2018/19 if they qualify – contrary to last year’s UEFA decision and CAS ruling.  Is this correct?

Who at UEFA made the decision to allow CSKA-Sofia to play in Europe next season?

CSKA-Sofia took over the licence of Litex Lovech in the summer of 2016. It was given a new registration code in FIFA’s Transfer-Matching System. All correspondence and judicial reviews consider CSKA-Sofia to be a new club, starting life in 2016. According to UEFA’s three-year rule, as UEFA argued last year, this makes the club ineligible for UEFA competitions until the 2019/20 season. What has changed?

The “original” CSKA Sofia still owes its former players one million euro in outstanding wages. This has been concluded by FIFA’s dispute resolution chamber and CAS. According to article 66 of UEFA’s club licensing and financial fair play regulations, overdue payables to employees are not allowed if a club is to compete in Europe.
With CSKA Sofia’s unpaid debt to former players, can CSKA-Sofia compete in UEFA competitions?

Have UEFA come out with a statement on their website regarding this matter? If not, why have UEFA not made a public statement about this?

UEFA replied on Tuesday 10 April, citing “new evidence” in the case as the reason for rendering a new decision, made in February this year, allowing CSKA-Sofia to participate in European competition from the 2018/19 season.

What the “new evidence” consist of, UEFA does not say in its reply.

Abuse in the shadow of luxury